Impact of Entrance Exams regime since 2005

IMPACT of ENTRANCE EXAMS REGIME since 2005

In the 21st century, the importance of competitive exams has increased tremendously relative to school and college exams. This is due to several Government resolutions and Supreme Court judgements. However, this crucial change in the rules of the game has been registered by only a fraction of the students and parent community. The rest do not seem to be aware of the changes yet. We can broadly categorise competitive exams into 2 types:

NB:  The key difference is that Entrance exams success give you admission to a higher education college or University. But academically-oriented competitive exams do not give you admission to any college as such.  They have to be written to get exposure and encouragement via scholarships, medals and certificates.

A landmark Supreme Court ruling in October 2005 and another reinforcing judgement in 2015 set the stage for Entrance exams to replace Board exams as the principal criterion for admissions to professional courses like Engineering, Medicine, Pharmacy, Law, Architecture, Design etc in India. Till 2004, admission to almost all professional courses in India was on the basis of XII Board exam marks. But the 2005 Supreme Court ruling changed all that and reduced the weightage to XII Boards to zero and made Entrance exams all important for admissions. The XII Boards marks were merely being used as an eligibility criterion only. For example, a student aspiring for Engineering must clear an Entrance exam like JEE or CET to get into an Engineering college but must score a minimum aggregate of 75% in XII Boards exam to be eligible. So, scores of 76% and 95% are equivalent in XII Boards as it clears the eligibility and admission is granted only on the basis of Ranks in Entrance exam

The clear reasoning of the Supreme Court in delivering this landmark judgement was that India has 27 different Boards and all of them have different syllabus, exam pattern and methods of paper corrections. So, it is impossible to normalise marks across the different Boards in the nation and hence the Supreme Court ruled that admission to professional courses must be on the basis of a Common Entrance exam and not on the basis of Board exams. This landmark Supreme Court judgement triggered a wave of transformations in the higher education field in India which shall be highlighted in this article.

These Single National Entrance exam shall be conducted multiple times in a year in Online mode and shall be multiple-choice questions based. Students may give the exam more than once in a year and the best score shall be taken as their final score. This system shall reduce stress on students considerably. This is a tried and tested system in US for the past 3 decades.

Also, the ONE NATION – ONE EXAM policy will create a standardised syllabus and uniform exam pattern for all students in the nation to focus on and eliminate a number of discrepancies which otherwise are prevalent in exam administration like syllabus and pattern mismatches and multiple admissions counselling procedures

As we can see, the advent of Entrance exams in the 21st century has shifted the tectonic plates of Education system in India tremendously. The sooner the entire student and parent community embraces this crucial change and adapts to the new normal, it will lead to improved overall academic performances of students across India. Then our nation can emerge as a global leader in producing highly skilled technocrats and professionals especially in the STEM domain.  This is key to India’s quest to become a super-power and a Vishwa Guru.

Posted by Prof. Durgesh C. Mangeshkar at 4:47 AM No comments: 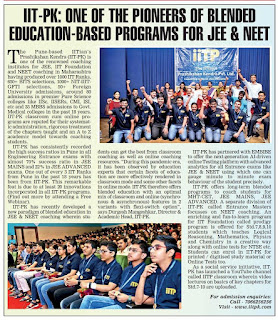 Posted by Prof. Durgesh C. Mangeshkar at 10:46 PM No comments: 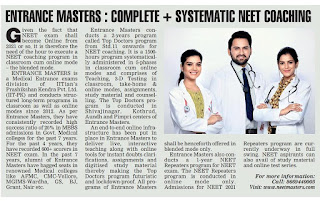 Posted by Prof. Durgesh C. Mangeshkar at 10:45 PM No comments: 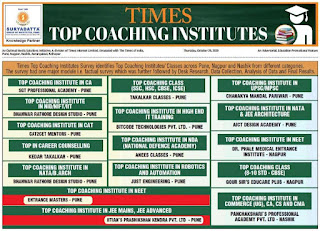 Posted by Prof. Durgesh C. Mangeshkar at 10:44 PM No comments: 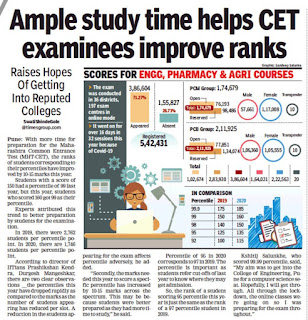 Posted by Prof. Durgesh C. Mangeshkar at 10:42 PM No comments:

The National Sample Survey Office, in its 2015 report, revealed that at least 25% of school and college students in India were attending coaching classes. In several states, the figure was at 75% — the actual numbers today may be higher.
Coaching classes are a parallel universe in the education space in almost all developing nations, including India. It is, therefore, worth examining — for parents, students and those involved in higher academics — the causes for the rise in demand for coaching classes.
The main reason for lakhs of students joining coaching classes is the inadequate quantity and quality of academic inputs offered in formal educational institutions such as schools and colleges. Moreover, parents today — due to increasing pressure at workplaces — are often not able to find sufficient time to hand-hold their children in matters concerning higher academics. So, many children end up needing attention from proven specialists. At the same time, the coaching classes provide specialized teaching and personalized study guidance facilities, which help students get a competitive edge in school and college exams. Students with various learning disorders also benefit from coaching classes. There have been instances in which students, who are unable to grasp concepts, are ignored by their lecturers who simply don’t have the time or resolve to assist a small number of strugglers.
Besides these everyday reasons, extra coaching has become almost indispensable for aspirants of competitive and entrance exams like JEE, CET, NEET, UPSC etc. as specialized guidance for these exams are not offered in schools and colleges. Coaching classes also often provide access to their teachers for instant doubts clarification via several technological tools.
Also, as coaching classes have kids from various institutes, students get an opportunity to widen circles and be aware of methods at other colleges and schools.
In summary, coaching classes are essential for entrance exam preparations. The mushrooming of coaching classes is a clear indicator of the failings of the formal education system.
If the government wants to reverse the trend of increased dependency on extra coaching, it must first work towards drastically improving quality of academic input in schools and colleges. It must also reach out to the coaching classes community to enable them to play a constructive role in addressing the various academic requirements of the students’ community.
The government and the society must view coaching classes as part of the solution. Coaching classes can potentially play a catalytic role in the education space. This will help all stakeholders boost learning outcomes in students and build a robust knowledge society. *This Article has been published by Times of India, Pune on 6th February 2018.
Posted by Prof. Durgesh C. Mangeshkar at 3:20 AM 17 comments: 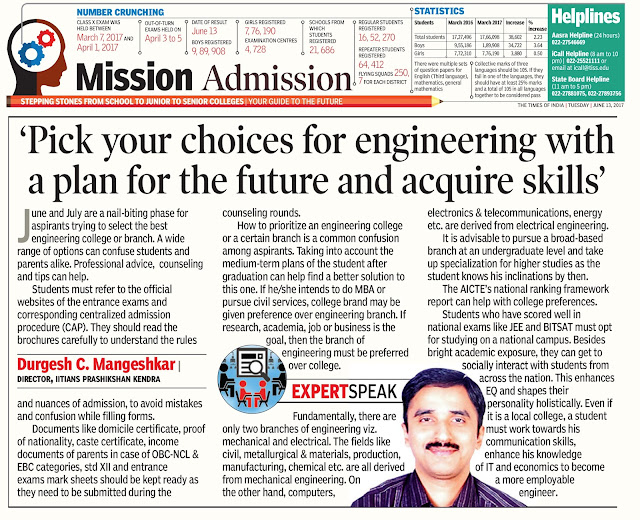 
“June and July are a nail-biting phase for aspirants trying to select the best engineering college or branch. A wide range of options can confuse students and parents alike. Professional advice, counseling and tips can help.


Students must refer to the official websites of the entrance exams and corresponding centralized admission procedure (CAP). They should read the brochures carefully to understand the rules and nuances of admission, to avoid mistakes and confusion while filling forms.


Documents like domicile certificate, proof of nationality, caste certificate, income documents of parents in case of OBC-NCL & EBC categories, std XII and entrance exams mark sheets should be kept ready as they need to be submitted during the counseling rounds.


How to prioritize an engineering college or a certain branch is a common confusion among aspirants. Taking into account the medium-term plans of the student after graduation can help find a better solution to this one. If heshe intends to do MBA or pursue civil services, college brand may be given preference over engineering branch. If research, academia, job or business is the goal, then the branch of engineering must be preferred over college. Fundamentally, there are only two branches of engineering viz.mechanical and electrical. The fields like civil, metallurgical & materials, production, manufacturing, chemical etc. are all derived from mechanical engineering. On the other hand, computers, electronics & telecommunications, energy etc. are derived from electrical engineering.


It is advisable to pursue a broad-based branch at an undergraduate level and take up specialization for higher studies as the student knows his inclinations by then.


Students who have scored well in national exams like JEE and BITSAT must opt for studying on a national campus. Besides bright academic exposure, they can get to socially interact with students from across the nation. This enhances EQ and shapes their personality holistically. Even if it is a local college, a student must work towards his communication skills, enhance his knowledge of IT and economics to become a more employable engineer.”
Posted by Prof. Durgesh C. Mangeshkar at 4:53 AM 7 comments:

Prof. Durgesh C. Mangeshkar
Founder Head & Academic Co-ordinator of IIT-P. Philosopher and guide to all students at the academy. Advocate a free-style teaching methodology and the principal architect behind all the initiatives of IIT-P and envisages to make IIT-P a rich grooming school for dynamic young minds with logic cum creative talent, research temper and entrepreneurial mind-sets coupled with social responsibility. Also passionately advocate a holistic educational approach to the academic process and maintain that it is perhaps the only sustainable teaching element impartible to students & a vital need of the hour. Also an active member of the Art of Living Foundation.